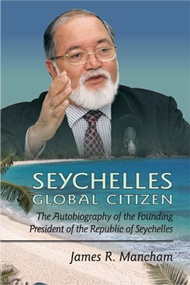 Seychelles Global Citizen: The Autobiography of the Founding President

There is growing competition for power and influence in the Indian Ocean which is considered the world's pre-eminent energy and trade interstate seaway at the time when China and India find themselves locked in an "uncomfortable embrace." No one is better qualified to tell this story than Sir James R. Mancham KBE, Founding President of the Republic of Seychelles, the 110 idyllic islands archipelago, who was overthrown in a Marxist coup in 1977 while he was in London to celebrate the Jubilee of Queen Elizabeth II. Sir James was also the lawyer for Philco-Ford, Pan Am and RCA when the US Air Force decided to build a strategic tracking station in Seychelles to gather military intelligence over the former Soviet Union during the Cold War.

As Prime Minister of Seychelles, Sir James witnessed very closely the establishment by the USA of its most modern naval, air and military complex on the island of Diego Garcia. But Sir James autobiography “Seychelles Global Citizen” is more than a political treatise about the conflict for power and influence in the Indian Ocean and about Seychelles internal political intrigue and turmoil, it is also the story of a colorful human being who has been dubbed "The Trudeau of the East" and who has also been called "The Ernest Hemmingway of the Indian Ocean."

“James Mancham is the first President of Seychelles, one of several firsts achieved by this remarkable man. There is no doubt that here is a man with the capacity for high office —not only in his own country but also internationally.… He is ambitious, politically shrewd and a devoted Seychellois. He has the flamboyance of a Trudeau, the political determination of a Lee Kuan Yew and the stamina for travel of a Kissinger.”
— Alan Baily, The Times of London

"I admire Sir James' tenacity and even more than that, his historical reflections as an objective view rather than the subjective. His War on America is my reference point of his organizational abilities which gives me even greater admiration for his achievements; best of all; his devout interest in global peace. I do very much look forward to this new tome."
— Most Reverend Delmer Tripp Robinson, ThD, PhD, EdDM, Archbishop (Emeritus), The Anglican Church, USA

"Sir James R. Mancham, the first President of the Republic of Seychelles, has become a visionary and passionate spokesman for the peoples of the small island states, a trail-blazer for peace across the oceans for he is truly a "Global Citizen" and a powerful advocate of our vision of "one human family under God."'
— Jose de Venecia, Five-time Speaker of the Philippine House of Representatives, Founding Chairman of the International Conference of Asian Political Parties (ICAPP), and Chairman - Emeritus of the Universal Peace Federation (UPF).

"Mr. Mancham is the father of his country, and with his superb PR skills, he transformed an obscure backwater into a destination synonymous with the good life. Because of that, he bequeathed to the Seychelles tourism-generated income far beyond what even the most benevolent former colonizer could have offered. And he did so by energetically and skillfully being a man for his nation in all regions."
— Washington Times