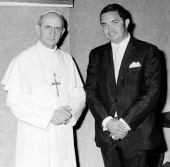 With His Holiness Pope Paul VI at the Vatican in 1967

With former UN Secretary-General Boutros Boutros-Ghali at the UN Headquarters on May 17th, 1995

At the Franco-African summit in 1977, listening to the Chairman President Leopold Sedar Senghor of Senegal. Besides him is Valéry Giscard d’Estaing

JRM with former President of Portugal, Mario Soares, at Soleil d’Or, Seychelles in 1997. The first sighting of Seychelles was by the Portuguese navigator, Ferdinand Magellan

From left to right: Prince Charles, Ferhad Vladi, lady admirer of the Prince, and JRM

Press briefing at the United Nations headquarters on September 22, 1976, after Seychelles was admitted to U.N. membership by the General Assembly 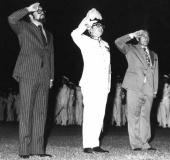 Saluting the lowering of the Union Jack and the raising up of the new Seychelles flag at midnight on June 29, 1976, signaling the birth of the Republic of Seychelles. On left: JRM.