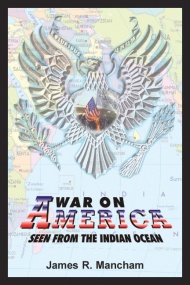 War on America; Seen from the Indian Ocean.

An astute observer...
“As the first President of the Seychelles, Sir James Mancham had a ringside seat to emerging Cold War struggles for the control of strategic islands in the Indian Ocean. He was eventually overthrown in a pro-Marxist coup while on a visit to London.. His War on America is crammed with fascinating details hitherto untold—and told well by Sir James. An astute observer of the forces that have shaped developing countries and islands, and spawned the breeding grounds of transnational terrorism, he has made an important contribution to the historical record.”
—Arnaud de Borchgrave, Past President and Editor at Large, UPI and Washington Times, author of the bestseller The Spike.

An additional perspective
“What he says in his book can give us an additional perspective to view the US war against terrorism and the controversial presence of American troops in Mindanao...the question of America's capability to lead the world in the campaign against terrorism after September11. He uses sources, all friends of the US, even Americans themselves, to demonstrate that he means well in giving his advice now. One source he uses is Henry Kissinger's Does America Need a Foreign Policy? America's ultimate challenge is to transform its power into moral consensus, promoting values not by imposition but by their willing acceptance in a world that, for all its seeming resistance, desperately needs enlightened leadership.”
—Carmen N. Pedrosa, Editor-in-chief, Republika, Columnist, Philippine Star

An analysis of the international situation...
“War on America Seen from the Indian Ocean constitutes an analysis of the international situation against a background of experience and wisdom. Like the author, I aspire to the build-up, day after day, of a more balanced, equitable and peaceful world. In this respect France contributes, where she can, to promote principles essential for peace and the well being of our common humanity.”
—Jacques Chirac, President, Republic of France

Certainly timely…
“The book is certainly timely, with the great US interest in both Indian Ocean politics and the machinations of our government there and elsewhere far from our shores. Readers will be fascinated to read how President Mancham and the Shah of Iran shared similar fates, given short shrift while the policy makers dithered. These and other misbegotten adventures have distressed many of us who have lived and worked overseas.”
—Mr Phil Keeler, former Head of Panam Operations at US Tracking Station in Seychelles

30 years of Seychelles recent history...
“Apart from the basic issue of the US role and moral stand in Today's world which the author addresses with such vigor, [War on American Seen from the Indian Ocean] also forms a good recapitulation of some 30 years of Seychelles recent history—seen from the outside as well as the inside—hence, I found it of real interest to me as a longtime friend of the Seychelles.”
—Hans Worms, Former Director for International Development, Inter-Continental Hotels Group, Hamburg

US moral leadership needed…
“According to Mancham, the United States should exert moral leadership on par with its military power. America should keep in mind it stands for much that people hope for around the world.”
—Peter Porco Anchorage Daily News, 23rd February 2002

An important book…
“An important book reflecting on some of the deeper issues related to the event of September 11.”
—Mr Thomas G. Walsh, Secretary-General of the Interreligious and International Federation for World Peace

Living history…
“We would be wrong to assume that War on America Seen from the Indian Ocean is a book of past superpower rivalry in our region. Its in fact living history which we must all learn.”
—Henri Mammootoo, Week-End, Mauritius

A book full of insight
“If a script of the life of James Mancham were submitted to a film producer as a James Bond-style thriller, perhaps it would be dismissed as too fanciful even for Hollywood. In his latest book, War on America Seen from the Indian Ocean, we re-live Mancham's rise from humble origins in an isolated corner of the globe, to first President of his country and world Statesman. There are international stories of major global events including decolonization, super-power rivalry, the CIA, assassination, political skullduggery, the Cold War, the coming and going of world leaders. There are the lives of the super rich and the desperately poor nations of the world, and there are more local events in Seychelles, including independence, a coup, mercenaries, and the fight to save the most ecologically important atoll on the planet. All these are facts that have been woven into the fabric of one of the most colourful lives a man can live. Yet all these tumultuous stories are but a backdrop to a book full of insight, an insight that arises in a man who has lived at the heart of so many events on the world stage and yet retained not a shred of bitterness for the hand dealt to him by friend or foe alike. America is one of those friends, but a friend that often appears blinded to the needs of its allies by its own narrow agenda. War on America is a reminder from Mancham: the ripples that spread from the foreign policy actions of the most powerful nation on earth may not always be in the interests of the vision of freedom, democracy and peace to which America aspires. Not many former Presidents of any country attempt to pass on their experiences with such candour and goodwill and perhaps none would even consider passing on a profound political message with poetry. The ending of the book is such a poem, a message of optimism, a message of hope and a tribute from James Mancham to the power for good and evil that lies within every human being to create a better future not just for one nation but for all.”
—Andrian Skerrett - Author, businessman and conservationist.

Why Attack America?
On September 11, 2001, the United States of America was surprised by a deadly terrorist attack fueled by hatred for the United States that Americans could not understand. Why anyone would want to attack a peace-loving democracy not interested in war?

A Constructive Reflection on US Foreign Policy in the Indian Ocean
This book is written to help Americans understand how people in other parts of the world are impacted by a United States’ foreign policy that often seems arbitrary, self-serving, and inconsistent with the ideals of democracy. The author is past president of the Seychelles, neighbor to Diego Garcia from which many of the airstrikes against the Taliban in Afghanistan were launched. His comments are informative and constructive for anyone interested in creating a better and more coherent US foreign policy that will lead to a more peaceful world and prevent a recurrence of terrorist attacks on America.
Sir James Richard Marie Mancham is the founding President of the Republic of Seychelles—a tiny island nation and one of the most beautiful countries in the world. The Seychelles became a “strategic US territory” in the early sixties. He extended hospitality when the US Air Force decided that it would be in the US national interest to build a satellite tracking station atop of Seychelles’ main Island of Mahé in the middle of the Indian Ocean to gather military intelligence over a then aggressive Soviet Union. He was not prepared for what followed. This book is an account of US foreign policy seen from the Indian Ocean from the 1960s to the present.
“James Mancham is the first President of Seychelles, one of several firsts achieved by this remarkable man. There is no doubt that here is a man with the capacity for high office —not only in his own country but also internationally.… He is ambitious, politically shrewd and a devoted Seychellois. He has the flamboyance of a Trudeau, the political determination of a Lee Kuan Yew and the stamina for travel of a Kissinger.”
—Alan Baily, The Times of London
“Mancham hailed, ‘International Ambassador for Peace and Goodwill’.”
—Seychelles Nation