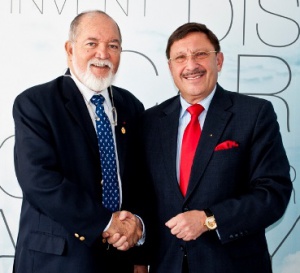 Sir James arrived from Belgrade, Serbia, where he had attended a high-level conference concerning the ‘Future of the Romas in Europe’ jointly hosted by the European Centre for Peace and Development (ECPD) and the Luxembourg Institute for European and International Studies (LIEIS).
Following keynote addresses by Professor Dr. Federico Mayor, President of ECPD, who was for several years Director-General of UNESCO and Professor Dr. Christopher Coker, Professor of International Relations at the London School of Economics and Political Sciences, Sir James made his introductory remarks in his capacity as a longstanding member of the ECPD’s Academic Council.

Sir James recalled stories from his youth where the Romas, who were commonly referred to as ‘Gypsies’ because of their nomadic lifestyle, conveyed a negative picture of these meandering people in Europe.

“There was never a static cohesion of Romas under one leadership. In this connection, they have behaved like Stateless people or people belonging to a failed State and often their right to citizenship and respect for their human rights have been neglected or overlooked,” he stated.

Sir James went on to explain how, following the creation of the European community, various initiatives have been taken by various European nations in an endeavour to solve the plight of the Romas and provide them with their human rights and dignity as a people.

“But,” said Sir James “in the light of the grave illegal immigrants crisis now menacing Europe, the problems of the Roma were being swept under the carpet once again and luckily for them, there are institutions like the ECPD and Luxembourg Institute for European and International Studies ready to provide a ‘voice to the voiceless’ and keep discussions about the Romas and the need to find solutions to their problems on today’s agenda.”

Sir James who was awarded the Africa Peace Award 2016 on the 12th April in Nairobi, Kenya, returned to Seychelles on Sunday 5th June.