JRM with Kenneth Kaunda, Founding President of the Republic of Zambia, in Seychelles 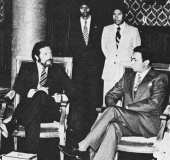 JRM meeting with the late President of the Ivory Coast, Houphouet Boigny

In discussions with President Mobutu Sese Seko of Zaire

At State House, Mombasa, meeting Jomo Kenyatta, founding President of the Republic of Kenya in 1972, with David Joubert (left), Minister Mbui. Koinange and Peter Wand-Tetley (behind).

JRM leading a demonstration against independence in the 1960s 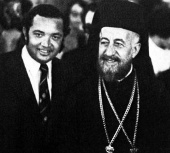 Archbishop Makarios (right) with Mr Mancham (the Chief Minister). Makarios arrived in Seychelles as an exile, left as an honoured guest, and returned as a much loved friend.

Official photo of founding President of the Republic - issued at the time of Independence - 29th June, 1976

Posing with Herman Cohen, Assistant Secretary of State for Africa prior to Sir James’s return to Seychelles after more than fifteen years in exile.

With the Chairman of the IIFWP - Rev. Chung Hwan Kwak and President Remengesan of the Republic of Palau. In the background - Mr Taj Hamad - Secretary-General of the World Association of Non-Governmental Organisations (WANGO)

JRM - on his right - President and Mrs Sushkevich of Belarus - on his left - Hon. Hamilton Green, former Prime Minister of Guyana and Hon. Laxmi Mall Singhvi and Mrs Singhvi. H.E. Dr. Singhvi is a Senior Advocate of the Supreme Court of India - was his co

Group photo of the Chief Justices of the World. Founding President Mancham in central position with Former President of Mauritius Mr. Cassam Uteem on the right and Mr. Jagdish Gandhi, Convenor of the conference on the left.