With former US Vice-President, the Hon. Dan Quayle and H.E. former President of Madagascar, Mr Albert Zaffy with Mrs Zaffy looking on at an IIFWP Conference in Seoul in year 2000.

The US Capitol in the background - with Washington lobbyist, Grover Norquist, who is President of the American for Tax Reform protesting against the decision of the US Government to close down its embassy in Seychelles

In Washington, D.C. - meeting with Speaker Newt Gingrich of Congress after the US Government had decided to close down its Embassy in Seychelles

Sir James being greeted by the Emir of Qatar, H.H. Sheikh Hamad bin Kalifa al-Thani at the opening of the 5th Annual Qatari-American Conference on Free Market and Democracy which was held in Doha

Sir James with H.E. Takehiro Togo - President of the ECPD and Mrs Christine Samandari-Hakim - representative of Baha'i Community in France

Sir James with some members of the UPF's Presiding Council at a get together in Washington D.C. From left to right:- H.E. and Mrs Stanislav Shushkevich, Dr. Thomas G. Walsh - Secretary General of UPF; Dr. Eva Latham - President Human Rights Teaching Inter

Former President Mancham exchanges business cards with Dr. Michael Otto - Chairman of the Executive Board and Chief Executive of the Otto Group - a main sponsor of the WFC initiative

From left to right: HE Prime Minister Raila Odinga of Kenya and Rev. Mwalagho Kililo - Regional Secretary-General of UPF 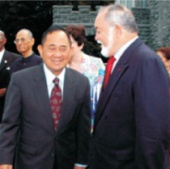 Sir James with the Rt. Hon. Jose de Venecia - five-time Speaker of the Philippine House of Representatives, Founding Chairman of the International Conference of Asian Political Parties (ICAPP) and the Chairman-Emeritus of the Universal Peace Federation

Delivering a speech at the Hinckley Institute in Utah, USA - 2007

From left to right: Sir James R. Mancham, Alexander and Lady Mancham on arrival in Seychelles after 15 years in exile

At International Leadership Conference in Nairobi, Kenya in January, 2009

With HE President Mohamed Nasheed of the Republic the Maldives